Gum Disease and Your Health: Is There a Connection?

Gum Disease and Your Health: Is There a Connection? 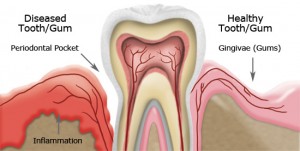 Did you know that poor dental health actually affects more than just your mouth? Recent findings show that there is actually a link between oral health and your general health, and that not taking good care of your teeth and gums can actually lead to serious health problems. Some of the problems that are linked with bacteria as well as inflammation found in your mouth, include diabetes, and heart disease.

Much like the other parts of your body, your mouth is a breeding place for bacteria. These are generally harmless however, poor dental hygiene may result in an increase in the bacteria found in your mouth, which can then lead to gum disease as well as tooth decay. Neglecting to take care of your teeth and gums regularly can result in your suffering certain ailments you never thought you could have.

How can bacteria on your gums and teeth bring about such illnesses? Researchers cannot definitively say how, but they believe that bacteria in inflamed gums may escape into a person’s bloodstream, which can then injure that person’s major organs. The inflammation, they say, seems to be one of the common links found in these diseases as well as in gum disease. To help you see just how important it is to take proper care of your teeth and gums, here is a list of some of the ailments that researchers say are associated with poor dental habits and gum disease:

Probably the only way you can avoid the possibility of getting these ailments via gum and tooth infections is to prevent such infections from happening. Talk to your dentist about proper dental hygiene and have your teeth and gums checked regularly in order to alleviate such problems.

Common Causes of Toothaches and What to Do About Them

What Do You Do When You Find Yourself with a Cracked Tooth?

St. Lawrence Dentistry strives to minimize pain through non-invasive and conservative dentistry. However, one aspect of dentistry is pain management....

What are ceramic Onlays? Ceramic onlays are among the most beautiful and durable ways to fix a tooth. They are...

If you've had one or more fillings, then it was most likely filled in with a grey metal amalgam. You...

Porcelain Veneers (The What, Why, and How)

Crown lengthening is a dental procedure performed by Dr. Hawryluk to help restore broken down teeth. There are many causes...