September 29, 2014 by allan in Uncategorized 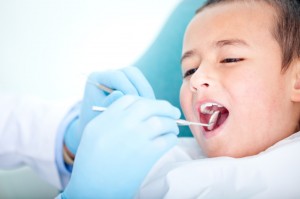 You may have heard parents saying every now and then that they are not really that keen about having a child’s baby tooth saved or treated like a permanent one. The usual reason that they give is that these are not permanent, and that their child’s baby teeth will fall out eventually anyway. What they do not know is that primary teeth actually play a huge role in how well their permanent teeth turn out.

When a dentist tells a parent that a child’s tooth, despite being a primary one, needs to undergo root canal treatment, they are doing this for a number of very good reasons. For starters, a child’s primary teeth are there to help reserve spaces in the mouth for the permanent teeth that are to take their place. Another is for a child to learn to chew and to speak properly as well.

It is important that these teeth be taken care of the way permanent teeth are cared for. This is because of the fact that a damaged primary tooth can also damage the permanent tooth that is to follow after it. When a tooth is damaged, the chance of it popping up damaged is high since permanent teeth do grow underneath these milk teeth. This is why dentists want to treat these baby teeth much like permanent ones – to avoid the possibility of permanent teeth erupting diseased.

This is one of the main arguments dentists bring forth when a parent does not agree to having a damaged baby tooth treated with a root canal or a similar treatment. More-often-than-not, a parent often asks that the dentist pull out the tooth instead. This is usually because such a treatment is relatively cheaper than a root canal. What they do not realize is that this will actually do more harm than good.

When a child’s baby teeth are extracted before their time, which is before the permanent tooth is ready to take its place, the probability of teeth drifting into the vacant space is high. When this happens, the child’s teeth will become crooked, and the tooth that is supposed to occupy that particular space will pop out crooked as well. When it is trying to find available space to grow into, it will more than likely emerge in limited space, making it come out the wrong way.

Also another problem that comes with this is that, should the tooth indeed be extracted, the child will have to learn to chew without one of his milk teeth or molars. This would change his eating habits and would make it difficult for him to properly masticate his food. This should not be allowed.

Parents should make it a point to keep their child’s milk teeth intact all throughout childhood, and to let these grow out as naturally as possible. If their dentist recommends certain treatments to help keep these teeth intact, like root canals and such, this should be greatly considered. This will help their kids grow their permanent teeth naturally and without any problems with shifting and crooked teeth, among other things.

Twice a Year Dental Visits: Is a One Size Fits All Advice Ideal?

Smile with Confidence - The Wonders of Cosmetic Dentistry

St. Lawrence Dentistry strives to minimize pain through non-invasive and conservative dentistry. However, one aspect of dentistry is pain management....

What are ceramic Onlays? Ceramic onlays are among the most beautiful and durable ways to fix a tooth. They are...

If you've had one or more fillings, then it was most likely filled in with a grey metal amalgam. You...

Porcelain Veneers (The What, Why, and How)

Crown lengthening is a dental procedure performed by Dr. Hawryluk to help restore broken down teeth. There are many causes...